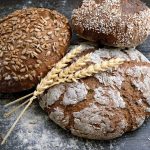 Three-grain bread is Bread of the Year 2021

Pumpernickel, toast bread and pretzels – these are breads with a long history.

Germany is the land of bread, and with over 3000 different specialties, it is a mecca for all bread lovers. According to the Bread Institute in Berlin the most popular are German mixed breads: breads based on a mixture of wheat and rye flours. Yet German bread culture, which was even recognized by UNESCO as an intangible German cultural heritage in 2014 due to its unique diversity, has much more to offer. Sourdough, in particular, is used in many traditional recipes.

Use: According to historical accounts, sourdough was first discovered in ancient Egypt. Since then, it has been used in many classic recipes that have survived through the ages. Here are some of the most popular traditional recipes.
Pumpernickel
Pumpernickel bread became known in 1540 and was commonly found in bakeries around Osnabrück. At that time, people resorted to the often called “black bread” due to famine. In the course of time, pumpernickel became a world-famous delicacy thanks to the advancement of production techniques. Due to its sweetness, the bread is particularly tasty and therefore requires no toppings, making it a cheap, tasty alternative during wartime. The sweetness is not due to the addition of sweeteners such as syrup, but to the way the bread is prepared. During the 16- to 24-hour baking time, maltose (malt sugar) and glucose (dextrose) form from the cereal starch in the dough. The caramelization of these sugars leads, among other things, to the bread’s characteristically sweet taste. The most important factors in the production of pumpernickel bread are time and the appropriate equipment. The mixture of rye meal and dark rye flour with sourdough must soak (swell) in water for several hours before it is baked in a special baking box or oven.
Toast Bread
Whether as a quick breakfast or a small snack, toast bread is found in almost every pantry. Many centuries ago, it was already eaten in England. Like today, it was served mostly with butter for breakfast or with tea in the afternoon. For the wealthy, jam was available for the toast. Since butter and jam dripped through the pores of the bread and soiled the dresses of the fine ladies, the “four pieces method” was invented. In the previous toast-making method, the pores were oriented opposite to the direction of the slicing. In the new method, the long dough pieces were divided into four equal parts and placed in the loaf pan, each one individually turned. This created a pore in the direction of the cut, which prevented the liquid jam to drip through. To this day, this method is used by all German toast manufacturers as well as in the UK and USA. Most often, the production involves sourdough, which is responsible for the fluffy consistency and slightly sour taste. It is best eaten lightly toasted, as the toasting process gives the bread a delicious intensely aromatic flavor.
Pretzels and pretzel Bread
With butter, with beer and Obazda in Bavaria’s beer-gardens, or just plain, pretzel bread is a universally popular classic for young and old throughout Germany, especially in southern Germany. Where the responsibility for the invention of the pretzel falls has not been determined, however, a Swabian legend says that the discovery of the pretzel dates back to 1477. A baker named Fieder from Urach, having been sentenced to death by Count Eberhard due to a disgrace, had to bake a bread within three days, through which the sun shone three times. He would be allowed to live if he impressed the Count, who greatly appreciated Fieder’s baking skills. Days passed without a good idea and on the last day, when he saw his wife in front of him with her arms crossed, the brilliant idea came to him. He copied the shape of the folded arms and placed the dough on a baking tray. To his horror, his cat knocked over the baking tray and his creations landed in a tub of caustic soda. Despite this mishap, the baker put the tray in the oven, and this resulted in deliciously crispy pretzels, saving the man’s life. Similar stories can be found about the Bavarian origin of the pretzel. The Christian story of the bread as part of the Lord’s Last Supper is also widespread. As far back as in ancient Rome, a pretzel bread in a ring form was found to have been used for rituals. Characteristic to the pretzel are the caustic soda solution and the golden-brown crispy texture. Since caustic soda can be slightly harmful, special care must be taken during preparation and employees must be specially trained. If you bake the pretzel using a mild sourdough, you can achieve a particularly aromatic, mildly acidic bread.
Share
2